Marquette’s rich history is incomplete without acknowledging the university’s location among the lands and waterways of the Milwaukee area’s Indigenous nations. Over the past several years, the Marquette community has pushed for the university to better honor and celebrate these connections to the area’s Native peoples and nations — and students, faculty, staff and university leaders have been working hard to answer the call. On this Indigenous Peoples Day, we reflect on the progress made and the work yet to be done.

Last year, Marquette culminated a yearslong conversation with key stakeholders and adopted a land and water acknowledgment to recognize the long history of Native peoples and nations that lived on and stewarded the land and water where the university now resides.

The written and oral versions of the land and water acknowledgment celebrate the unbroken connection Native peoples and nations have to their traditional territories and can be read aloud at the beginning of any event hosted on Marquette’s campus.

Next month, the university will begin installing a physical marker that displays the land and water acknowledgement. Located at the edge of Eckstein Common on the southeast side of the Alumni Memorial Union, the sculpture will feature the full land and water acknowledgement on three organically shaped metal plates connected to form a cylinder that will allow it to encircle a birch tree native to Wisconsin. The design also includes cut-out illustrations of plant and animal life that hold meaning for Wisconsin tribes. 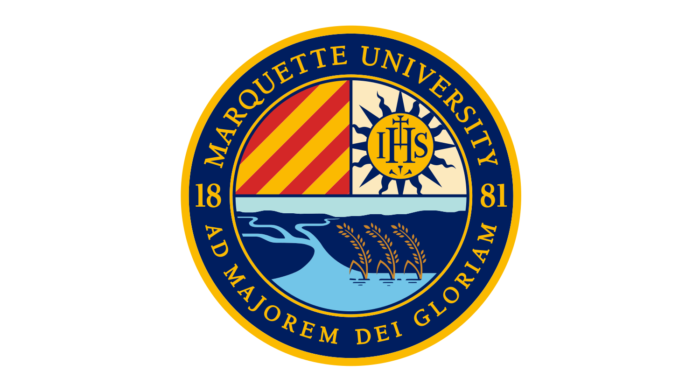 Marquette President Michael R. Lovell in early 2020 formed a university seal committee aimed to update the seal to reflect Marquette’s history, tradition and Catholic, Jesuit mission, as well as more accurately depict the role of the Indigenous nations that guided Father Marquette on his journey. The Marquette Board of Trustees approved the updated university seal in February.

The new seal includes three parts encircled by an outer ring with the Marquette name, its founding year and the Jesuit motto Ad majorem Dei gloriam, “For the greater glory of God.” The interior upper half honors Marquette’s Catholic, Jesuit tradition and values. The interior lower half acknowledges the university’s location among the lands and waterways of the area’s Indigenous nations. Milwaukee-based Oneida artist Kristelle M. Ulrich contributed to the creative design of the updated university seal.

Said Rev. Greg O’Meara, S.J., rector of the Marquette Jesuit Community: The seal “helps us remember that all journeys in our lives rely on the help of companions. It is thus a fitting metaphor for the educational mission of Marquette.”

It is important to recognize that the university seal differs from the university logo and athletics monogram. Marquette’s official seal is used on approved official and presidential documents and events. In addition, the seal is embedded into high-profile spots on campus, including on an outdoor archway and in several buildings.

The university is now in the process of updating the seal around campus, with plans to incorporate the new seal in some of its most prominent places, including but not limited to the Wisconsin Avenue archway outside the Alumni Memorial Union and the nine stone portals in the Wisconsin Avenue median.

Some seals around campus will not be updated; in those instances, educational plaques will accompany the old seal to provide historical context. In May 2022, Marquette announced a comprehensive partnership with Lac Courte Oreilles Ojibwe University in Hayward, Wisconsin, a nonprofit tribal college that has served Native students for 40 years. The Guaranteed Admission Agreement is a cooperative program partnership which allows LCOOU graduates to transfer to Marquette to continue their college education in select colleges.

Additionally, the Eck Family Foundation will endow an annual scholarship for one LCOOU student each year. Robert J. Eck, Arts ’80, is chair of the Marquette Board of Trustees, and his wife, Kim Eck, Comm ’13, is a volunteer ambassador and leader of the Marquette Mentors program.

As part of the agreement, Marquette and LCOOU will explore additional opportunities for students at both institutions, including:

“This is a tremendous and innovative partnership-building agreement between Marquette and Lac Courte Oreilles Ojibwe University that has the opportunity to benefit students at both institutions,” said Brian Troyer, dean of admissions at Marquette. “We are excited for our first partnership with one of Wisconsin’s tribal colleges to make Marquette’s transformative Catholic, Jesuit education even more accessible, including by easing the financial burden. At the same time, we are looking at partnerships with Lac Courte Oreilles Ojibwe University in other areas, including through our accelerated and specialized advance study pathway programs and unique learning experiences.” In addition to promoting respectful partnerships and outreach with Wisconsin’s Indigenous communities, the program activates research topics that have significant implications for increased awareness and understanding of Indigenous history and culture in Milwaukee.

The student cohort worked on three projects overseen by Dr. Samantha Majhor, assistant professor of English; Dr. Bryan Rindfleisch, associate professor of history; and Dr. Michael Schlappi, professor of biological sciences — all in the Klingler College of Arts and Sciences.

The projects included a study into the potential for reintroducing wild rice seed varieties to the Menomonee River Valley and how traditional ecological knowledge informs restoration efforts, archival research on Catholic Indian Boarding Schools, and an interactive data visualization map of Indigenous Milwaukee.

The mapping project received attention on and off campus, as it aimed to create a platform where all Milwaukeeans can learn and connect with the history that served as the foundation for the area where they live. Led by Rindfleisch, it put into perspective Milwaukee’s large populations of American Indian people and the Indigenous history of popular locations today like American Family Field, the Milwaukee Art Museum and the Mitchell Park Domes, which are built on Native lands.

All three Marquette Indigeneity Lab projects received interest and praise on and off campus.