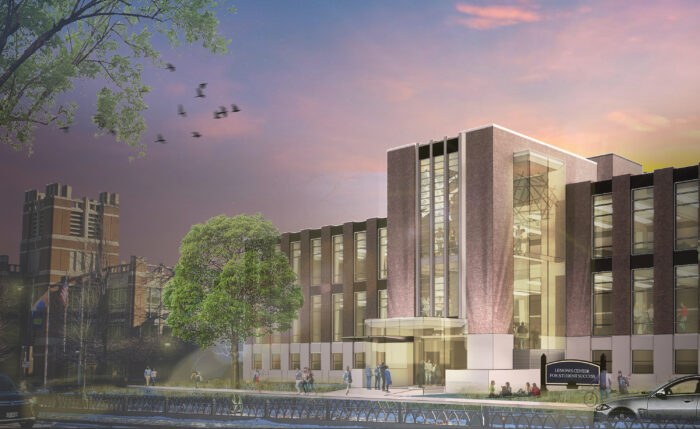 Marquette President Michael R. Lovell announced on Saturday, Feb. 26 that alumnus Marcus Lemonis, star of HGTV’s The Renovator, CNBC’s The Profit and chairman and CEO of Camping World, and his wife Bobbi have donated a $15 million gift to create the Lemonis Center for Student Success.

The Lemonis Center for Student Success will provide wraparound services for students across all majors, academic abilities and backgrounds to enrich and expand student opportunities — a primary objective in the university’s Time to Rise fundraising campaign. Lemonis is a 1995 Marquette alumnus of the Helen Way Klingler College of Arts and Sciences, and he competed in javelin on the Track & Field team from 1991 to 1995.

In his Presidential Address last year, President Lovell announced the university’s new Student Success Initiative as a top strategic priority. Lemonis has generously stepped forward to enhance and scale Marquette’s efforts to drive this priority forward in the most visible way possible. In recognition of this leadership gift, Marquette will rename Memorial Library to the Lemonis Center for Student Success and house the new center in the highly visible, centrally located space on West Wisconsin Avenue and 13th Street.

“It is always important for Bobbi and me to create a clear path to success for every individual, no matter where they are from or what they are studying,” Lemonis said. “As an alumnus who got the most out of my experience, it was paramount for me to highlight the things that worked and to strengthen the things that could get better. This initial gift is the start of building the road for others.”

“This gift is life-changing as it will help all students succeed and thrive on campus,” President Lovell said. “We are incredibly grateful to Marcus and Bobbi for their leadership and passion to help Marquette become a national leader and rise in new and innovative ways.” The Lemonis Center for Student Success will build on Marquette’s Catholic, Jesuit tradition by helping students engage in thoughtful discernment that is infused in Ignatian education, emphasizing a deep sense of connection and meaningful engagement. The center will connect students with a network of advisers, mentors and resources from the moment they step on campus until they graduate. In addition, the center will employ innovative technology and groundbreaking research to support students as they develop the skills and resilience to overcome challenges that can range from lack of connection and mental health crises to academic or financial setbacks.

Provost and Executive Vice President for Academic Affairs Dr. Kimo Ah Yun noted the “sense of belonging” that all students will feel when they enter the inclusive new center. “We are sincerely grateful for this generous gift from Marcus, which will dramatically elevate the student experience,” Provost Ah Yun said. “The Lemonis Center for Student Success will be a major step forward to help ensure that all students thrive beyond initial access and scholarship support.”

On Feb. 23, as part of his $15 million donation, Lemonis also announced a $5 million challenge to inspire others to join him in the student success movement. He called on alumni, parents and friends to give to the “gamechanger” who helped them succeed at Marquette. Funds from the challenge will support Marquette’s Student Success Initiative, which ranges from advising to internships, career counseling, high-impact learning, first-generation initiatives, peer mentoring and pre-orientation opportunities.

President Lovell shared that the additional funding from Lemonis will fund the “transformational facility upgrade that will drive Marquette to fully reimagine student success into a physical space that will serve as a new home for comprehensive support services.”

“We encourage our Marquette community to meet this challenge from Marcus and raise another $5 million dedicated to student success,” President Lovell said.

Provost Ah Yun emphasized the importance of continually improving graduation and retention rates, as well as the potential to reduce costs for students.

“We now have an opportunity to take a lead role in significantly lowering student debt by reducing the time it takes students to graduate,” Provost Ah Yun said. “Our Student Success Initiative is shining a light on ways to substantially improve retention and graduation rates. The support services housed in the Lemonis Center will elevate those initiatives.”

About Time to Rise: The Marquette Promise to Be The Difference

The university’s Time to Rise campaign has surpassed $565 million in funds raised toward its $750 million goal. The campaign has already secured more than 53,000 donors with more than 23,000 of these donors (44%) making their first-ever gift to Marquette. The university has raised $232 million in scholarship funds, growing its founding mission to provide an accessible education. In addition, more than 600 donors have given $100,000 commitments, and 110 donors have given $1 million or greater.