A granulosa glass frog rests along the glass of an indoor habitat owned by Teaching Instructor Rick Boyd.

By Kevin Keenan, communication intern in the Office of Marketing and Communication

Frogs don’t typically come to mind when thinking about physics.

Unless what’s being considered are the aerodynamics of a granulosa glass frog jumping from leaf to leaf in Central America – or, perhaps closer to home, just north of Marquette University, in an indoor habitat owned by Teaching Instructor Rick Boyd, who has become somewhat of a frog pioneer.

Boyd, a teaching instructor of physics in the Klingler College of Arts and Sciences, is said to be only the second individual in the United States to successfully breed the granulosa glass frog in captivity.

*Editor’s note: Boyd’s work with this species of frog, while unique in the United States — and certainly unique to a physics instructor — is undertaken in a variety of scholarly capacities by researchers across the globe. Marquette Today is not a refereed research publication and this feature story should not be considered a scholarly body of work. A male granulosa glass frog rests on a leaf in an indoor frog habitat owned by Teaching Instructor Rick Boyd.

While the frog is primarily lime green with hints of brilliant blue, its abdominal skin is translucent, giving the glass frog its alluring name. The species — found in Costa Rica, Honduras, Nicaragua and Panama — could go extinct if certain factors go unchecked.

But in just a few weeks, Boyd predicts nearly 30 of his granulosa froglets — tadpoles with legs — will make their way out of the water inside his “frog room,” marking another historic moment for the species.

One course Boyd teaches is Earth and Environmental Physics, which focuses on how environmental factors affect biological and physical processes in agricultural and natural ecosystems.

So, Boyd has a natural affinity for animals.

It wasn’t until about five years ago, though, a friend introduced Boyd to the tropical frog world.

“She was invited to a dinner party at my house when she called ahead and asked, ‘Rick, instead of bringing a bottle of wine or a dish to pass, would it be okay if I bring four little tropical dart frog tadpoles?’,” he recalls. “She knew I had a background in zoology and thought I would find their development to be fascinating.” One of Boyd’s blue and black tropical Azureus dart frogs.

From there, Boyd found himself hopping from one amphibian convention to the next, where those with the proper permits are allowed to buy and sell different frog species and help educate fellow frog enthusiasts. Boyd has since thoughtfully and carefully created a collection containing a mix of more than 500 tropical frogs, developing eggs, and tadpoles.

It was at one of these conventions Boyd acquired some granulosa glass frogs, including one female.

The female frog was a rare find, he says, because “Nearly all granulosa glass frogs collected from the wild are male. The males spend their time in open spaces chirping to get the attention of female frogs whereas the females tend to hide extremely well.”

Boyd has in the past bred and raised a different species of glass frog — the reticulated glass frog. But after scouring research online and consulting a glass frogs Facebook group, all signs indicated that aside from a biologist in California (a member of said Facebook group whose granulosas bred successfully last year), no other individual in the U.S. has been able to breed the frogs in captivity. 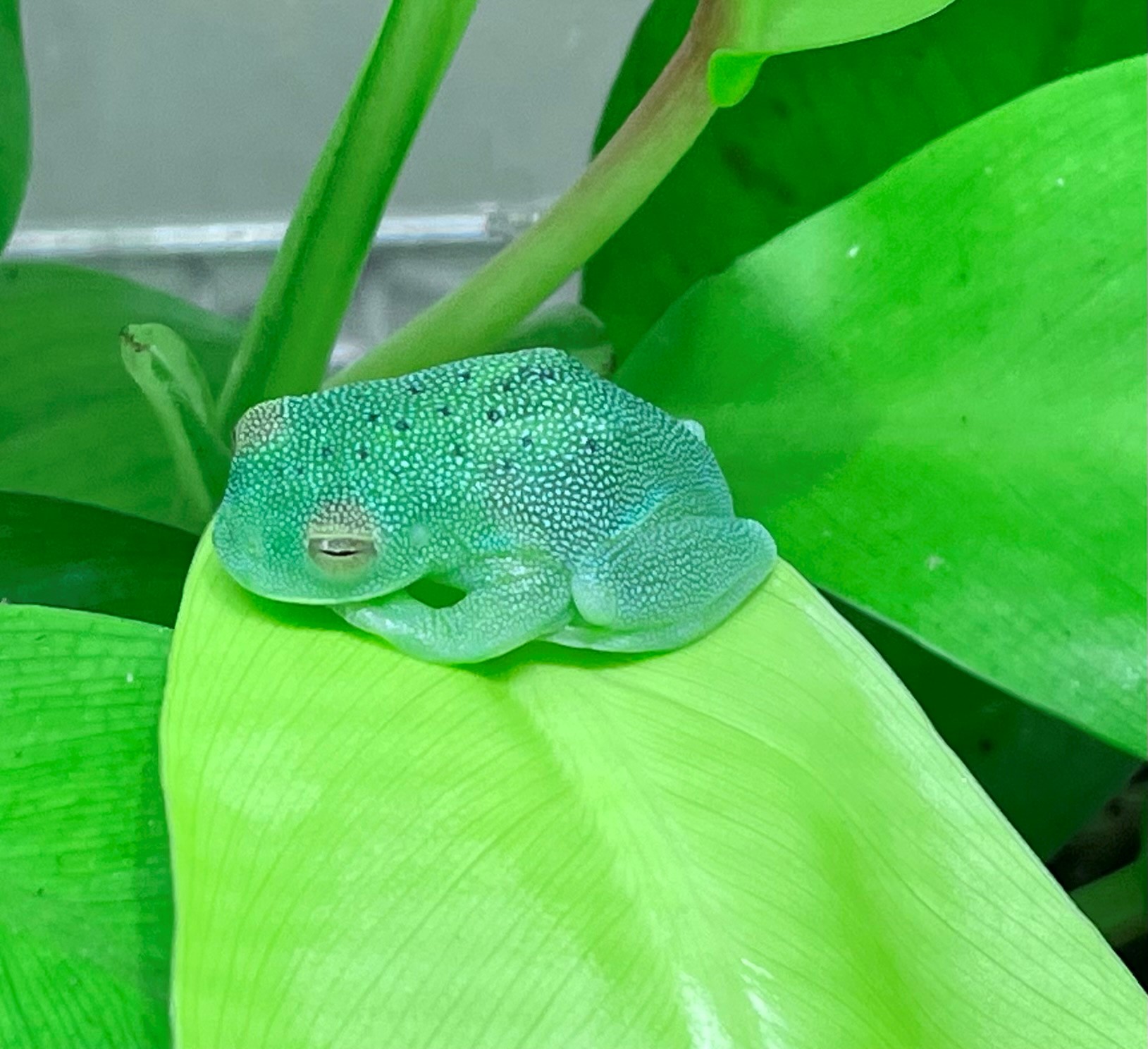 So, Boyd got to work adjusting the habitat to create the best granulosa glass frog breeding environment. He went through many trials and errors, but then the California biologist stepped in to help.

“He suggested I experiment with the cycles of my existing frog rain chamber and its mini digitized sprinkler system to better simulate the rain patterns for extended weeks at a time that the frogs would experience in their natural habitat in Central America,” Boyd says. The eggs laid by granulosa glass frog Mildred or “Millie.”

The female frog ovulated, eggs were laid, a male frog responded accordingly, the eggs hatched, and the tadpoles are thriving. Meanwhile, students in Boyd’s Major Concepts in Modern Science class were able to observe the various frog embryos with powerful physics microscopes as they studied embryology. The granulosa glass frog embryos that students in Teaching Instructor Rick Boyd’s Major Concepts in Modern Science class got to observe with a powerful physics microscope.

“This really is a huge success,” Boyd says. “And, yes, it is neat to be only the second known individual in the country to breed these frogs in captivity. But what is most important to me is to be a steward for these amazing creatures and help them combat the things that threaten the species.”

According to the most recent data, Boyd says, although the species is found in several protected areas, in the rest of its range it is threatened by severe deforestation related to coffee plantations, cattle ranching and more.

And unfortunately, Boyd adds, a fungus called Chytrid is spreading throughout the world, wiping out several populations of amphibians.

“We’re dealing with a race against time, collectively creating a Noah’s Ark population of various types of tropical frogs,” Boyd adds. “If I can be a part of building colonies of various frogs away from the fungus, they can essentially help keep these species from going extinct.” Two granulosa glass froglets – tadpoles with legs – swim in their tank as they continue to develop.

Additionally, using the concept of “Conservation through Commercialization” and creating populations like these in captivity to sometimes become available as pets, Boyd helps take pressure off the remaining wild populations that might otherwise dwindle due to people who legally and illegally remove the frogs from the wild to sell as pets.

“Rick making the notable strides he is making is a testament to the high-quality faculty we have here at Marquette,” says Dr. Andrew Kunz, chair and professor of physics. “It also demonstrates Rick’s passion for empowering students through real-world examples of the concepts they are learning about in class in an engaging way.”

Boyd has since named the history-making mother frog “Millie.”

“The name comes from “Mildred,” meaning ‘gentle strength,’” Boyd says. “The name is fitting for all of the careful planning and determination it has taken to get to this point.”